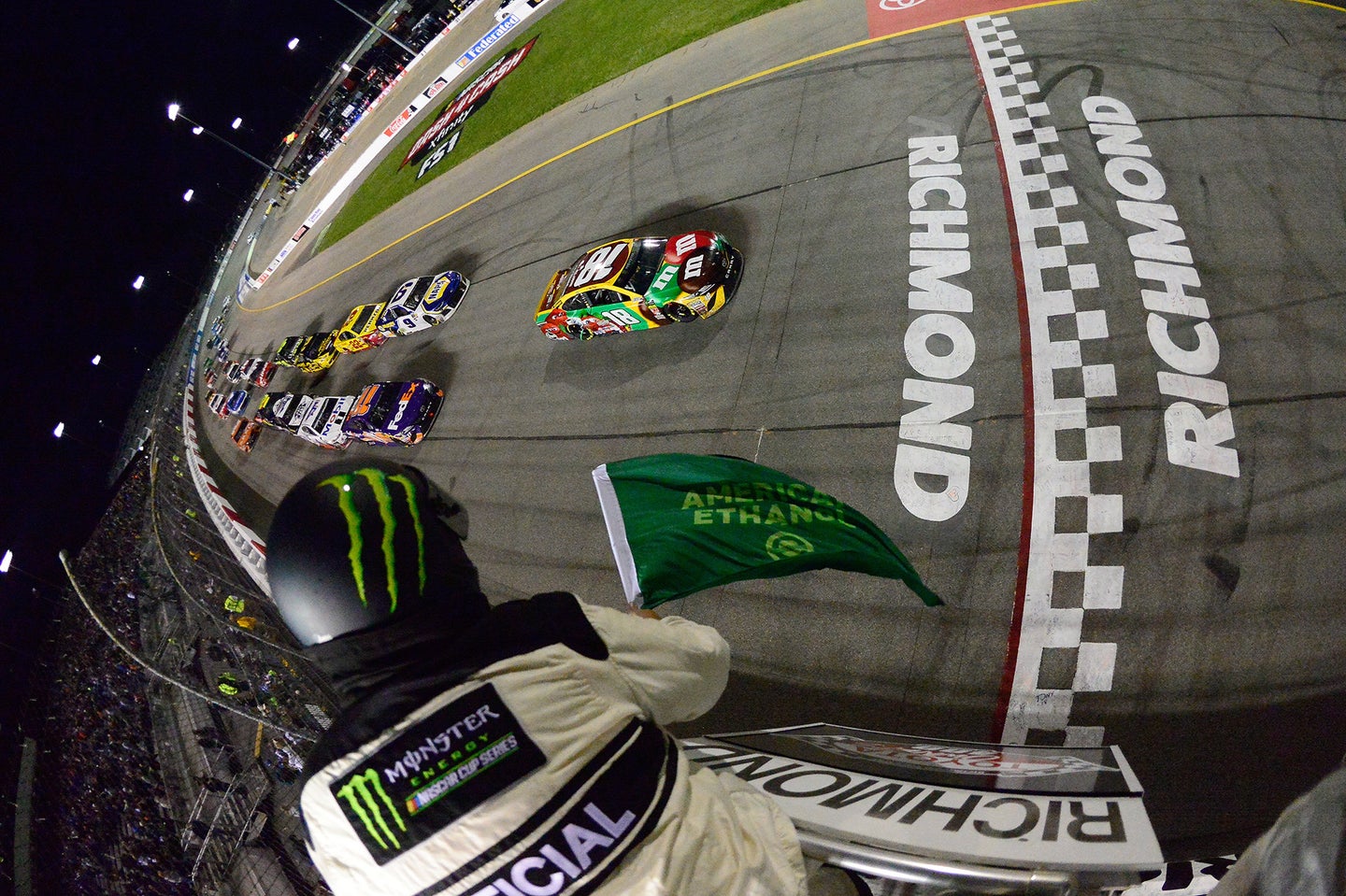 ​​​​The day was thunderous for Kyle Busch who started the Toyota Owner’s 400 from the 32nd position before he grabbed the checkered flag at Richmond Raceway. Actor Michael Rooker, known to NASCAR fans as Rowdy Burns in the movie “Days of Thunder,” led the NASCAR Cup Series field to green as the Honorary Pace Car Driver, but the race then turned into The Kyle Busch Show. This season Busch has won at Texas Motor Speedway, Bristol Motor Speedway, and now Richmond Raceway. Besides his three wins, he has seven top-fives and eight top-10s in nine starts.

After the race, Busch went into the stands and greeted fans. When asked if he had done it before he responded, "Maybe once, but probably not." Busch also added, "It was a 10-year anniversary. You know what? I was wondering if I'd come out alive. I think it certainly was different tonight. I saw a lot of yellow there at the front fence line." Busch was referring to the anniversary of his feud with Dale Earnhardt Jr., which led to him becoming one of the most booed NASCAR drivers today. He leads all drivers in the points standings.

The day looked encouraging for Team Penske driver Joey Logano who swept stage one and stage two. He couldn’t get the win, but he completed the race with a top-five finish. Martin Truex Jr. had an agonizing day after leading a race-high 121 laps. The driver of the No. 78 car was on the verge of winning his first short track race when a long pit stop foiled his changes.

Stewart-Hass driver Kurt Busch led the second most laps of the Toyota Owner’s 400 with 98, but he wasn’t able to close out the race with a top 10. He finished right outside the top-10 in eleventh. One of the most surprising finishes of the day was Chase Elliott. A series of cautions in the final laps and a late race charge by Elliott put him in a position to become the runner-up at Richmond. He secured his fourth top-10 finish of 2018.

Back to the Superspeedway

Short track action is over for now; next up on the Monster Energy NASCAR Cup Series schedule is restrictor plate racing. The top-level stock car series is moving on to the unpredictable Talladega Superspeedway where it’s anybody’s race to win and every driver's race to lose. If Kyle Busch can make it four wins in a row, his victory would be a treat for NASCAR fans. The Geico 500 (188 laps, 500.08 miles) will race Sunday, April 29 at 2:00 p.m. EST.