Kyle Busch did what he needed to win the Food City 500 at Bristol Motor Speedway. 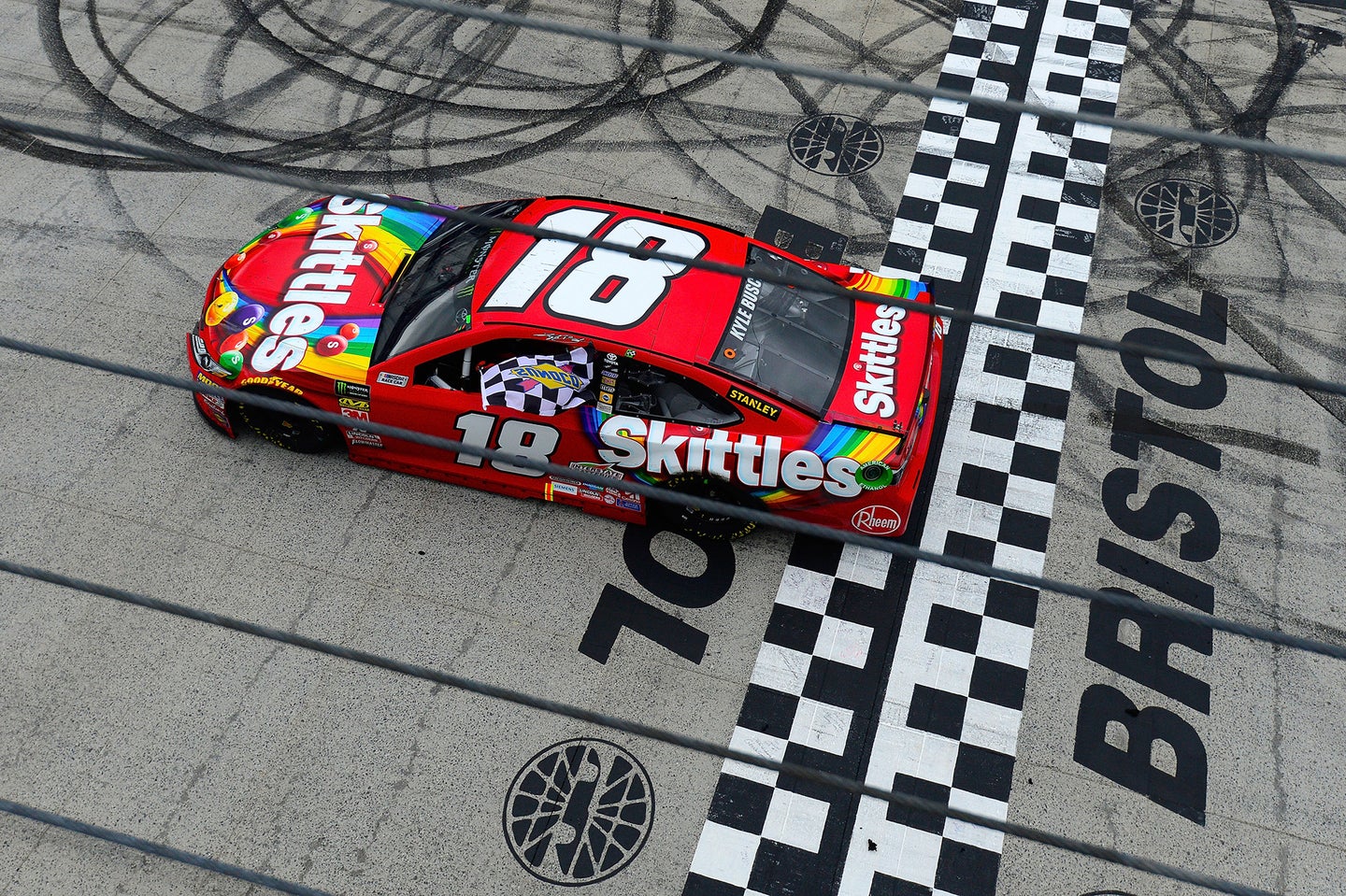 The first race of the season at Bristol was red flagged and postponed to Monday. A delayed start didn’t stop Busch from driving his No. 18 Skittles Toyota to Victory Lane in a fairly stormy way (pun intended). The late charge for the lead and a bump-and-run on Kyle Larson sealed the deal for the pole winner.

The Joe Gibbs Racing driver has two victories and seven top 10s this year. Although Kevin Harvick has three wins this season, Busch leads in the overall Cup point standings. Larson finished in second for his fifth top 10 finish this year. When asked about being bumped by Busch, Larson replied, “I knew it would be hard to get back to him. I knew I would need a lapper to kind of hold him up on exit and kill his momentum to allow me to maybe get back to his bumper, but there just weren’t a whole lot of cars left out there.”

Last week I asked, “Can Hendrick Motorsports driver Jimmie Johnson get that old thing back?” I also wondered if one of NASCAR’s young drivers would finally make their way to Victory Lane.

Well, Johnson did not win, but he scored a top-five finish. He managed a third-place finish. Not bad considering it’s been a long time since we have seen the seven-time Monster Energy NASCAR Cup champion in the winner’s circle.

Johnson was asked if getting one of these under his belt would give him confidence and momentum going forward and replied, “I can’t explain why or how, but it takes a little while to get the momentum rolling in the right direction, and I think today was—the last two days was a big step in the right direction for us.” His young teammate Alex Bowman wasn’t too far behind him when he crossed the finish line racing to a fifth-place finish in the No. 88 car.

If the playoffs started today, Paul Menard is in and Johnson would be on the outside looking in. Second-year Cup driver Erik Jones who holds the 12th playoff spot would also race for a championship based on the current’s standings. It is too soon to talk playoffs, but let that sink in. So far this season, five winners including Austin Dillon, Kevin Harvick, Martin Truex Jr., Clint Bowyer, and Kyle Busch have secured a spot in the playoffs.

Darrell “Bubba” Wallace Jr. has not won a race yet, but he led his first lap as a Cup driver. Wallace did not finish the day at Bristol with a top 10—he scored a 16th place finish. A top 20 isn’t bad and leading six laps at the half-mile track should not be easily dismissed. After the race, Wallace took to Twitter to explain what happened. Wallace said he was “devastated, absolutely devastated.”

The short track action continues next week as NASCAR rolls into Richmond Raceway. The Monster Energy NASCAR Cup Series Toyota Owners 400 (400 laps, 300 miles) will race Saturday, April 20 under the lights at 6:30 p.m. EST. Last week all talk was whether Kyle Busch could get back-to-back wins. Now fans (and Busch Haters) are wondering can he do what Harvick could not and go for three wins in a row.