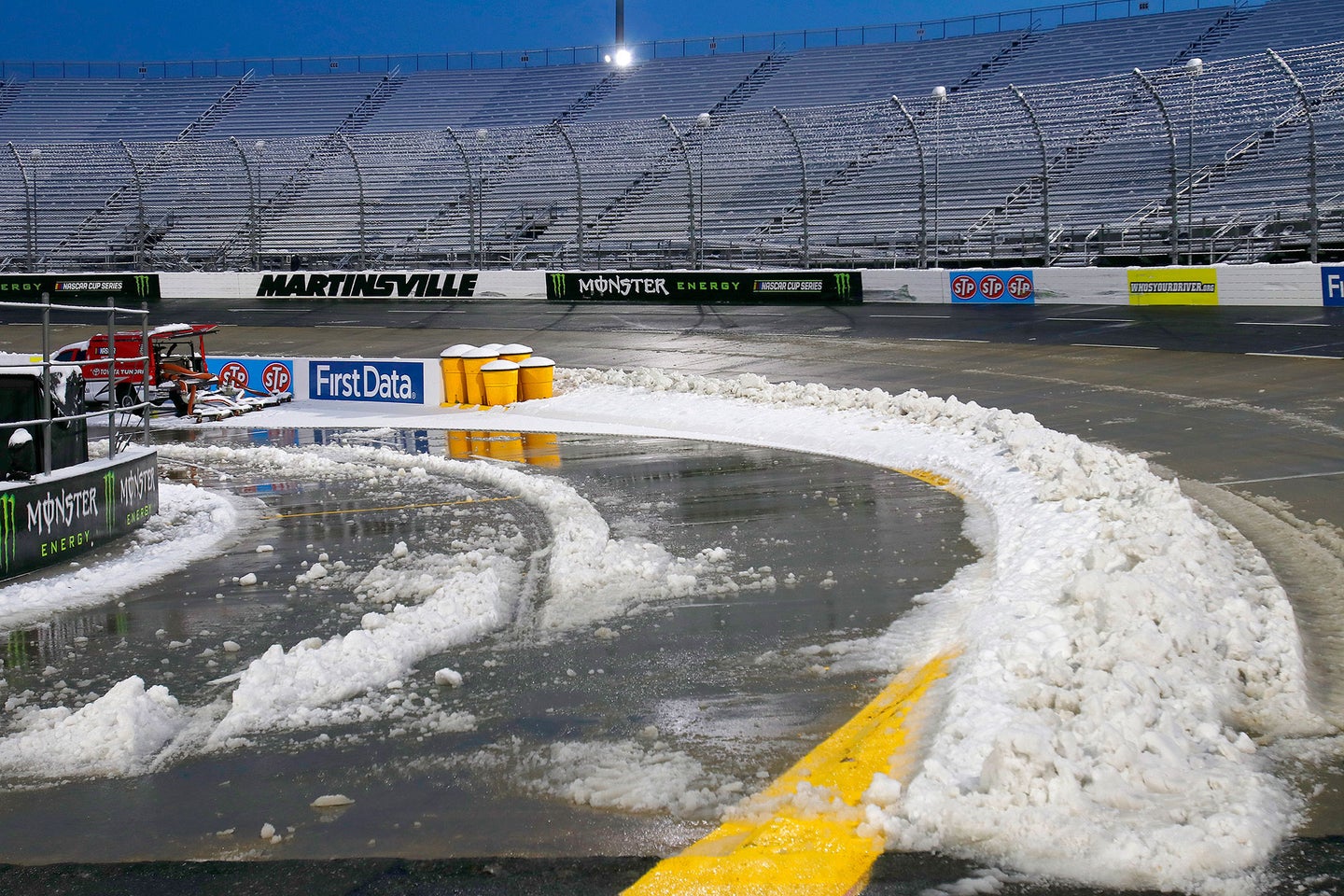 Martinsville is more than a half mile of mayhem, and on top of that, it’s currently a winter playground. Thanks to Mother Nature blessing the track with a few inches of snow, the Monster Energy NASCAR Cup race at Martinsville Speedway was suspended. The forecast showed no signs of inclement weather on race day that would prevent the 500-lap spectacle from going on as scheduled, but the aftermath from the snowfall the day prior proved to be too much to overcome.

The Alpha Energy Solutions 250 NASCAR Camping World Truck Series race was stopped 23 laps in and rescheduled to resume on Sunday setting up a double header. To the dismay of diehard NASCAR fans, fate intervened and the race is now rescheduled for 11 a.m. EST on Monday, preceding the STP 500 Monster Energy NASCAR Cup Series race. Below is everything you need to know about the Cup race that is now running on Monday.

Past 10 Winners at the Martinsville Speedway

As with any other NASCAR Cup series race, there are many storylines leading up to race day. Sure, Truex Jr., who won the last week’s race at the Auto Club Speedway, sits on his third consecutive Cup pole this season. Of course, Kyle Busch seems ready for a breakthrough with three top-5s and four top-10s in five races since the start of the 2018 season. Let’s not forget that Busch has also won one of two races held yearly at Martinsville Speedway in 2016 and 2017. Then there is his Joe Gibbs Racing teammate, Denny Hamlin, who has won an impressive seven times at the half-mile track including three back-to-back victories. And yes, Darrell “Bubba” Wallace is driving the No. 43 STP Chevy Camaro ZL1 he designed with a paint scheme made famous by his team owner, Richard Petty. All these stories are great; however, heading into Martinsville there is only one story that most fans want to know the ending to—when, better yet, will Jimmie Johnson add another page to the history books and recover from this season’s shaky start by winning at Martinsville?

Hail “The King” and Prince

There is only one king of Martinsville, and that is Richard “The King” Petty. Petty dominated at the Virginia track during his heyday, amassing a total of 15 wins at the half-mile course. Between 1967 and 1973, Petty won 10 times at one of NASCAR’s oldest and certainly most thrilling speedways. The seven-time Cup champion mastered the shortest track on the Monster Energy NASCAR Cup Series circuit and Jimmie Johnson has clearly taken notes on how he did it. While Darrel Waltrip has the second most wins at Martinsville with eleven, Johnson is not too far behind with nine.

If Johnson can win at the old-style track, one of NASCAR’s original venues, it’ll put an end to his season-long dry spell that can also be traced back to last year. Jimmie Johnson’s most recent victory at Martinsville was in 2016 and prior to that, his last win at the speedway was in 2013. A win on Monday would put Johnson in an elite class, making him the third driver in Cup history with ten or more wins at multiple tracks. NASCAR Hall of Famers Darrell Waltrip and Richard Petty are the only other drivers with ten or more wins at multiple tracks.