Red Bull Will Make You Care About Racing

And it doesn’t have much to do with going fast. 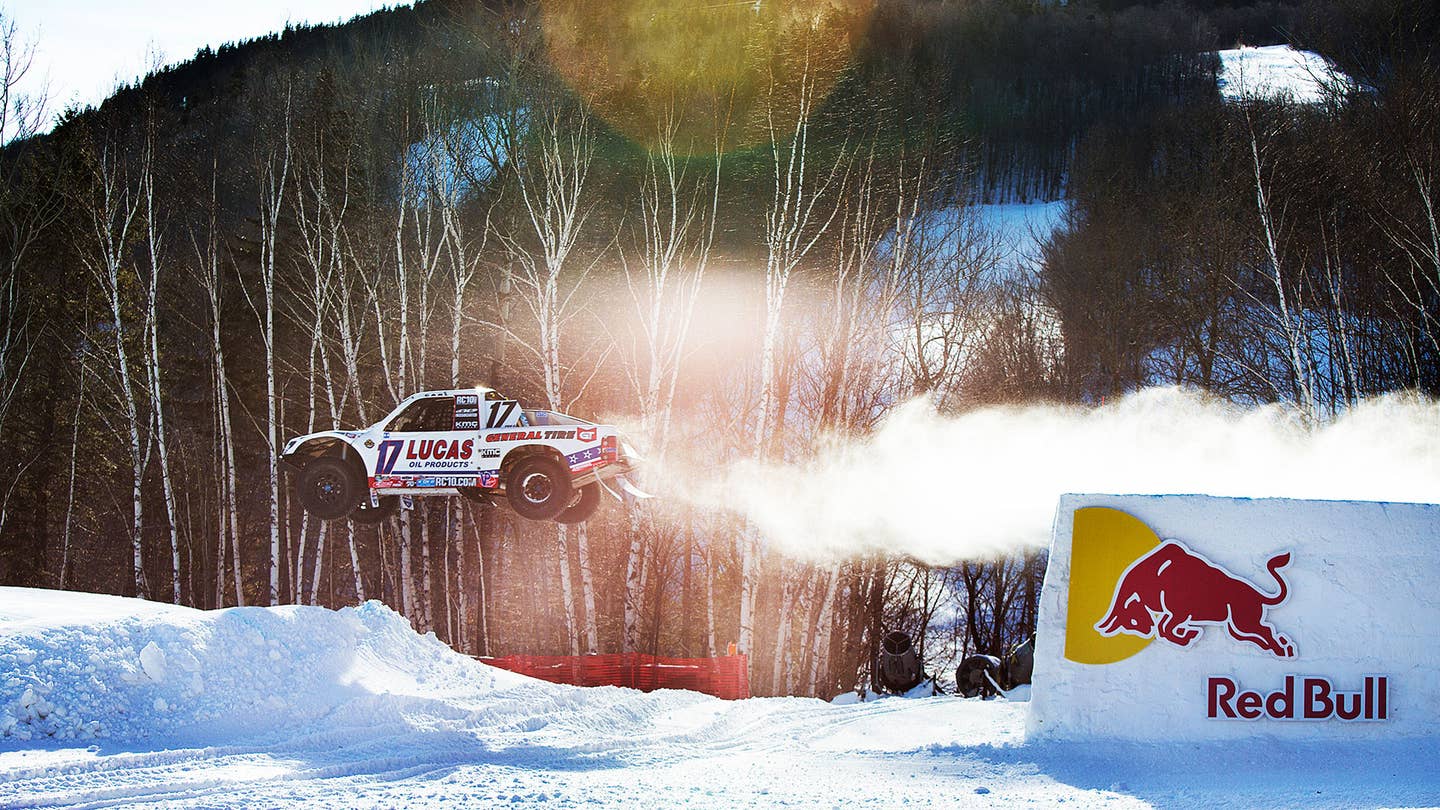 Roughly, my assignment was this: Go traipse around a Maine ski mountain as 900-horsepower off-road trucks bounce and scrabble and fly and crash into things; talk to people buzzed on energy drinks or beer (preferably both); and attempt to make heads and tails of all the mayhem, while the aforementioned trucks run the wrong way up a ski pass as snow bunnies lazily carve esses just a stone’s throw away.

That assignment didn’t work out for a couple reasons. First, snowy mountains are difficult to traipse around (That’s why people ski, Josh.—Ed.). Second, Red Bull, presenting its third annual Red Bull Frozen Rush, runs a very tight ship. So spectators were corralled in a single long corridor to one side of the course, while journalists were allowed to rotate between three—and only three—spots within the infield.

Little matter. The event was wildly entertaining, everything “racing trucks on a ski mountain” promises to be and then some. The format is a head-to-head sprint, with two trucks running simultaneously on intersecting A and B courses; one runs two laps on course A, then immediately switches over to B, while the other truck does the inverse. The track, which takes thousands of man-hours to build, is full of gnarly turns and jumps and off-camber landings, sending trucks skyward, then pitching them sideways as they crash back to Earth. When timed right, one truck’s massively airborne from a course A jump exactly as the competing truck, on course B, tear-asses directly underneath it. Close races mean both trucks dive into the final sweeping left-hander simultaneously, screaming back up the toward the finish line jump in massive clouds of snow. When sprints end, large chunks of the snow barrier are missing, ragged holes in the landscape, like a giant T-Rex was wandering through the course taking random bites.

All of this is to say that Red Bull Frozen Rush was proper fun. The race is being broadcast on NBC tomorrow (Saturday January 30) at 1:30 PM EST and redbull.tv’s race-on-demand feature. You should watch it. But, here, I want to talk about something slightly larger in scope—namely that, in witnessing Frozen Rush live, I might have seen some vague glimpse into the future of racing. And that’s a big deal. Motorsport as a whole is losing fans, and it’s losing them fast.

I know this because, while serving as senior editor at Road & Track a few years ago, I worked with racing insider Marshall Pruett on a story about shrinking fanbase. In the piece, he quoted a prominent exec from one of the most visible American series as saying, essentially: “Kids these days love technology, and hey, racing is all about technology, so if we can tap into that enthusiasm we’ll build our fan base for future generations.”

First, the real technological advances in top-level motorsport are invisible. Sure, a sideline reporter may point out a clever wing or some new shock absorber, but the properly mind-blowing stuff is locked away behind NASA-level security. Competitive advantages are only advantageous if nobody else has them. At a corporate level, racing series may want to show off tech, but individual teams would rather crap pineapples. [1]

Also, the move towards chassis and engine parity means fans can’t tune in for the type of off-the-wall lunacy—six wheels! turbines! whatever the hell this is!—that made Seventies F1 so damn entertaining. The few bonkers projects that do make it to the grid (see: Nissan GT-R Nismo) lose reliably and often, assuming they cross the finish line before failing spectacularly. Most people watch racing for the same reason they watch any sport: They want to root for something, a person or city or an idea, and they want their minds blown by athletes doing things they can’t.

The most critical misunderstanding, though, is the idea that millennials love “technology.” This is a common refrain among racing industry types, desperate to equate the newest iPhone with an upgrade to fuel-flow regulation software. Younger generations are surely more comfortable using (and more eager to throw money at) a group of consumer goods commonly called “consumer tech.” But that doesn’t actually assume an affinity for the underlying science and engineering that makes those things run. Being addicted to your phone and caring about how that phone works are very different things. [2] What millennials actually love is what those consumer tech products provide: Communication, community, and entertainment. [3] And STEM subjects (Science, Technology, Engineering, Math) have been anathema in this country for years, especially among males, who happen to make up most of the race-fan demographic.

No, what draws most people to motorsport is the spectacle and emotion, not the technology. Know who understands that? Red Bull. Boy, does Red Bull ever get that.

Despite a winning presence in everything from Formula 1 to NASCAR, MotoGP, and Australian V8 Supercars, Red Bull is not really a “racing team.” It is an energy drink company. But, more importantly, it’s a media company,[4] a concert event producer,[5] and the most visible extreme sports sponsor on the planet, backing athletes and events in surfing, skiing, motocross, even air racing. It can host a standalone off-road truck racing event in Maine, stream live to its own online television channel, add it to the site’s race-on-demand feature, use B-roll to create television commercials and promos, and then re-air the race to a national audience on NBC. Meanwhile, at the actual event, pretty young things with Red Bull can-shaped cooler-backpacks circulate through the crowd handing out free cans—as many as you’d like, the more the better!—while a giant screen alternates between replays, driver interviews, and the best fan Instagram photos.[6] And when the race ends and the spectators trudge back down the mountain, they’re herded into a massive merch tent-slash-bar-slash-DJ-booth slinging beers and bumping Lil’ Wayne. Hey, check out this incredible Uncontainable BMX video! And while you’re here, buy a t-shirt, won’t you? Red Bull is the perfect vertically-integrated lifestyle company.

Your average racing concern of course can’t do all of this, if for no other reason than they’re not printing money like Red Bull—this is a company that dropped a dude from space just for the giggles, after all. But they can, and should learn, from Red Bull’s showmanship and engagement. Racing is inherently thrilling but the presentation appeals only to the diehards. Motorsports are difficult to watch in person, often hard to find online, and more often than not aesthetically boring. When was the last time World Rally Championship used social media to its advantage? F1 actively removes fan videos from YouTube. The Le Mans 24 Hours broadcast might as well be a Roosevelt fireside chat, and is roughly as relevant.

Rather than giving a hard think to existing formats, racing’s Old Guard assumes fans will be captivated anew each season by slight tweaks to aero or fuel or push-to-pass rules. And it doesn’t have to be this way. Out on that Maine ski mountain, in the snow and the ice, as the sun broke through the clouds, I saw a better way.

[1] During my time at Road & Track, I spent a lot of time pitching race teams stories with the express purpose of drumming up interest in racing. I cannot tell you the number of times we were told me to bugger right off.

[2] As Joe Rogan put it: “If I left you alone in the woods with a hatchet… how long until you could send me an email?” And the type of technology that underpins a racecar is a very different animal than the consumer technology that millennials love anyway.