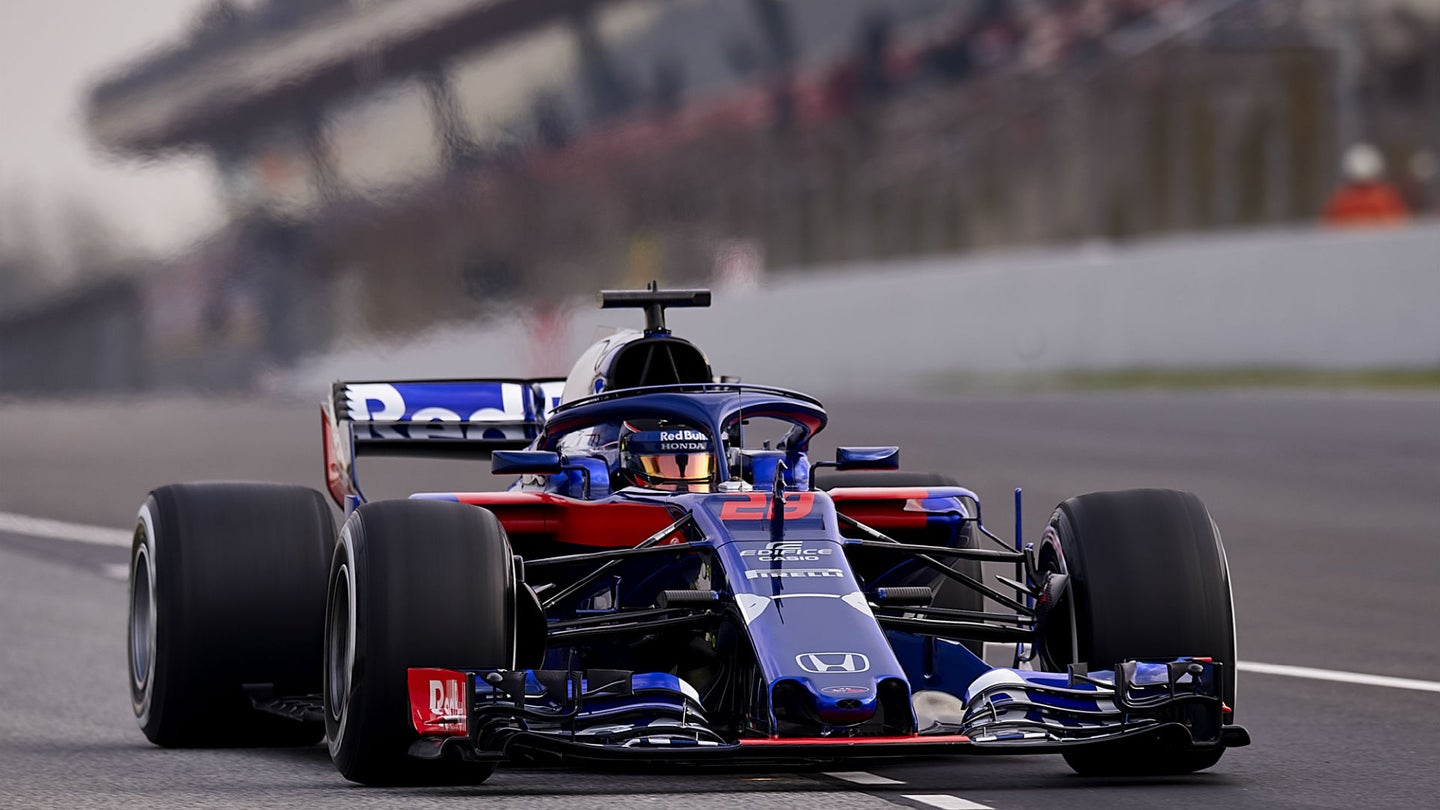 29—that's the number of laps Fernando Alonso ran in his McLaren-Honda on the first day of Formula 1 winter testing back in 2017, prompting the beginning of a long and painful split between the team and its engine supplier. At the beginning of their third year together, McLaren had had enough of Honda's consistent downturn. Their 'divorce' was finally announced in September of last year following months of acrimony, verbal slights, and 'Angry Alonso' memes and radio messages.

93—that's the number of laps Brendon Hartley ran this Monday in his Toro Rosso-Honda on the first day of winter testing ahead of the 2018 season. His best time, a 1:22.371, was good enough for eighth-place overall. "A really positive day", remarked Hartley, who prior to taking to the track at the Circuit de Barcelona-Catalunya helped teammate Pierre Gasly pull the sheets of Toro Rosso's STR13 with little fanfare, as the car had already been uncovered last week during a shakedown.

The STR13 features the same predominantly blue livery as its predecessor with a new thumb-style nose and intricate barge boards the most notable design changes. Perhaps the biggest challenge, however, has been converting their chassis to fit the Honda V6, which features very different design architecture from the Renault power unit that Toro Rosso previously ran. The team was aided by 'classes' they took in communicating with Japanese companies (i.e. Honda) and the fact they have some experience in adapting a car to a new engine after running Renaults, Ferraris, and Renaults again from 2015 to 2017, but it was still a busy six months at the factory in Faenza.

"Getting through 93 laps on the first day of testing was a great start to the campaign with the new Toro Rosso-Honda partnership", said Hartley, whose resumé consists of just four Formula 1 starts, but has extensive experience working for a manufacturer due to his tenure at Porsche in the World Endurance Championship. Although Hartley may be familiar working with car manufacturers, the Honda agreement is a landmark deal for Toro Rosso, providing the team with factory backing for the first time since its inception in 2006.

The Honda tie-up should also provide the team with some technical stability. All the while, Red Bull Racing will surely keep a close eye on how its 'B-team' gets on with the Japanese V6 in the back of its cars. Especially with "all things open for 2019 onwards," as Red Bull team principal Christian Horner described their own future engine situation to Autosport. "We will pay close attention to how things develop at Toro Rosso, but there are no preconceptions as we head into the season," said Horner.

The same can be said about Toro Rosso and Honda heading into 2018, however. Technical director James Key admits 2018 is "going to be a building year" and it's important to remember teams typically run their engines fairly de-tuned on the first days of testing. The team also faces the challenge of integrating the inexperienced duo of Hartley and Gasly. Furthermore, after Honda's troubled last three years with unreliable and uncompetitive engines, everyone in both Faenza and the land of the rising sun will be wary of a false dawn.