It's called the Brickyard for a reason, after all. 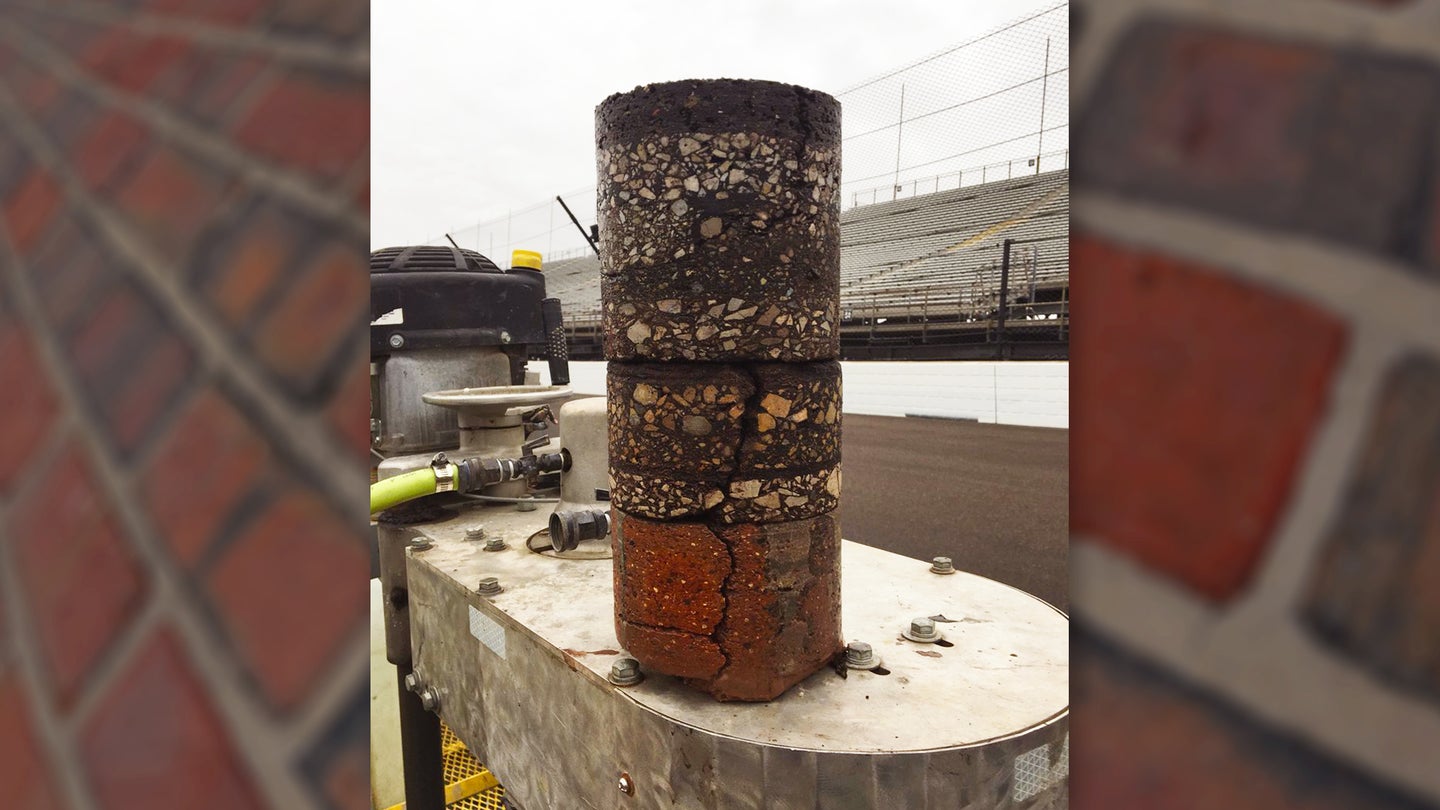 When scientists want to study the past and physical composition of something, be it ancient Antarctic ice or a geological formation, drilling out a cylindrical core sample is a standard technique. But in a fascinating example, recent paving work at the Indianapolis Motor Speedway shows the same process can be applied to the surface of a 108-year-old racetrack to peel back the layers of history—right down to the original bricks themselves.

Everyone knows it's called the Brickyard, but even with the vestigial strip across the start-finish line it's hard to imagine the 2.5-mile-long oval being paved entirely with bricks. When the track first built in 1909, with contemporary paving technologies not up to the task, founder Carl G. Fisher and his team opted to use an experimental mix of gravel, tar, crushed limestone, and asphaltum oil. The goopy mess was scooped onto the track and steamrolled flat.

The result was an unmitigated disaster. The first event Indianapolis Motor Speedway ever hosted, a weekend of motorcycle racing, had to be ended early because jagged rocks in the track's surface kept popping competitors' tires. A week later, participants in the inaugural car racing event complained the surface was disintegrating during practice; during the race, none other than Louis Chevrolet was nearly blinded when a stone was dislodged from the track and smashed into his goggles. A few laps later, driver Wilfred Bourque and his mechanic died in a violent rollover crash.

Two days later, two spectators and a mechanic were killed when a tire blew on Charlie Merz's car as he roared past a stretch of stands, sending the car spinning into a crowd of people. Imagine if any new track built today saw five deaths in its opening weekend—truly, this was a different time. But still, the AAA, who was in charge of auto racing in the country at that point, refused to sanction any more events at Indy unless changes were made to improve the track's safety and its terrible surface.

Fisher and company looked to either concrete or bricks as a solution, finally settling on the latter after they proved worthy in traction tests. Over the next few months, workers laid down 3.2 million 10-pound bricks over sand and filled in the gaps by hand with mortar to cover the entire oval. Concrete retaining walls were also added near the grandstand and along the turns. By December of 1909, the Brickyard was faster, safer, and ready for action.

It's safe to say that were it not for the improvements brought by the bricks, the track could have never started the tradition of an annual 500-mile race that still endures today. Unfortunately, using bricks as a racing surface is not a low-maintenance proposition, and more and more rough patches had to be repaved with asphalt beginning in the 1930s as race speeds (and fatalities) increased. The final sections of brick were paved over in October 1961, save for the famous "Yard of Bricks" at the start-finish line.

The core sample, drilled out on Friday, shows just over a foot of stratified asphalt over the original 108-year-old bricks. The changes in density as paving techniques improved over the years is just as interesting—you'll notice the top layer is much more uniform than those beneath it. And we can just as easily see it mounted on a pedestal in some motorsports museum. Or, frankly, our living room.

History has a way of hiding in plain sight, and at a spritely 108 years of age, it's no surprise that Indianapolis Motor Speedway has its fair share of secrets. But this core sample is a good reminder that it's the Brickyard for a reason, and it always will be.