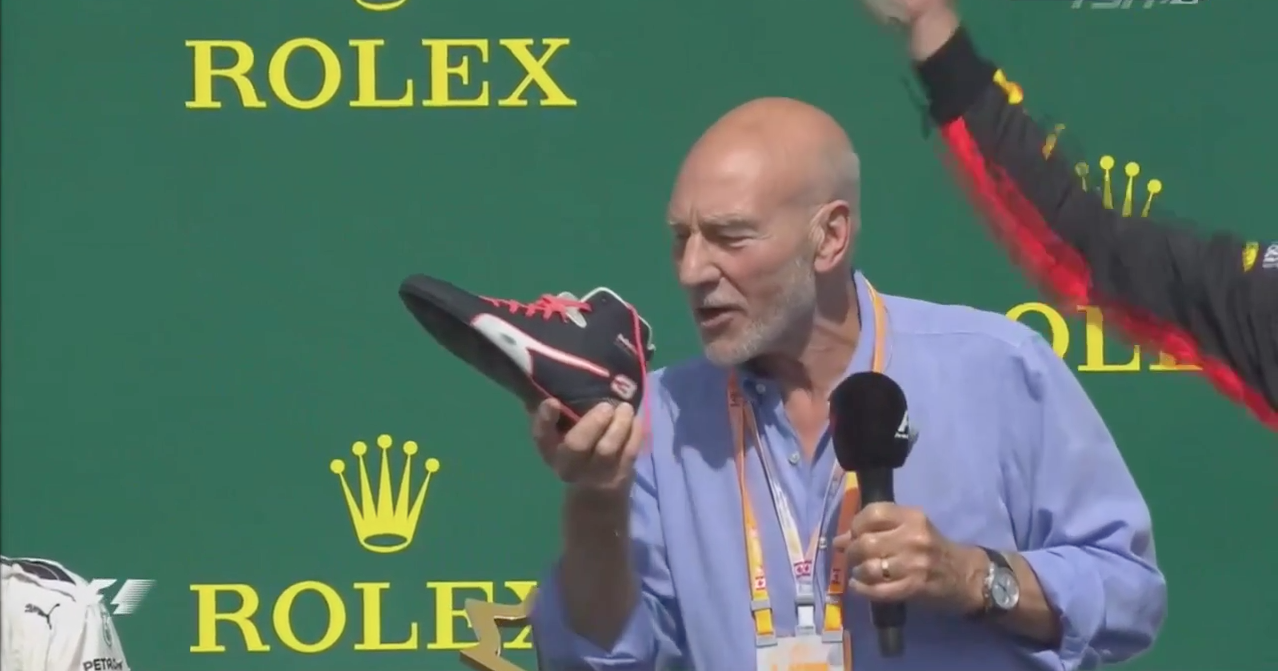 Today's Canadian Grand Prix saw Mercedes driver Lewis Hamilton leading from his pole position start to the finish line, with his spot atop the podium flanked by teammate Valtteri Bottas and Red Bull Racing driver Daniel Ricciardo. The podium ceremonies were accompanied by actor Sir Patrick Stewart, known to many as Captain Jean-Luc Picard of the USS Enterprise in Star Trek: The Next Generation. Because of his remarkable stage, television, and film acting careers, he was knighted by Queen Elizabeth II in 2010. Having the honorary sir prefix to his name does not mean he has become some stuffy old Englishman— he's still capable of grade-A horseplay, and game for anything, including the infamous shoey.

Don't know what a shoey is? Well, it's the Australian name for the act of drinking alcohol from footwear, be it shoes or boots. It was thought to be good luck in parts of Europe, but down under, it's commonly a hazing ritual at parties. Australian driver Daniel Ricciardo has seen fit to bring this tradition abroad, and he introduced it to the top echelons of motorsport with his podium finish at the 2016 German Grand Prix, his 100th race in Formula 1.

Since then, nobody has been safe from proposition for a shoey when Ricciardo makes it onto the podium. Former Red Bull Racing driver and fellow Aussie national Mark Webber did it, as did his current teammate Max Verstappen and team boss Christian Horner. Retired World Champion Nico Rosberg bowed to the pressure and drank from Ricciardo's shoe. Even Hollywood star Gerard Butler of Tomorrow Never Dies and 300 played along and chugged Red Bull from the boot.

And now, for your entertainment, Sir Patrick Stewart himself, drinking champagne from a sweaty boot. He doesn't hold back, and stains his shirt with the foul mixture of sweat and bubbly.